We have been working really hard behind the scenes on our provisional 2022 calendar of events and will be publishing these shortly.

ACU Affiliation codes, to renew your ACU licence for 2022, are now available by emailing Sarah Laws (contact details at the bottom of the page).

Our proposed first trial of 2022 is January 1st, so make sure you get your ACU membership renewed if you want to enter the trial.

We post all our events on Facebook and now have a YouTube Channel which we will use to house all our videos.  Watch out for some great footage coming soon, courtesy of Neil Sturgeon.

We would also like to extend a heartfelt thank you to the Blythes, Fleethams and Langstaffs who, after devoting so much of their time to our club, have decided to take a backseat.  However, we do hope they will still come to our events and enjoy being part of the club without having the responsibility for the running of it.

Before the main trial at Rock and Hop we were delighted to be able to present the Blythes, Fleethams and Langstaffs with a small token of our appreciation and give them honorary lifetime membership to Ripon Motor Club.  We look forward to seeing them at a trial again soon. 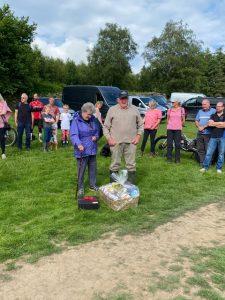 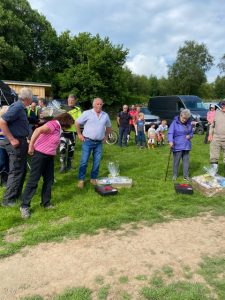 Ripon Motor Club was founded in 1909 and is a small, friendly Trials Club catering for all ages and abilities.  We are affiliated to the Yorkshire Centre of the ACU.

A Brief History of our Club

Tom Ellis was a stalwart member of the Ripon Motorcycle Club along with his wife Mary, who did much of the paperwork associated with Tom’s interests.  He first discovered motorbikes in 1940 with a 150cc Francis Barnet.  However, the war and the Royal Navy intervened until 1945 when a 350cc Panther was purchased to compete in trials, an interest of his brother Jack.  The Panther didn’t last long and was replaced with a new 500cc Matchless.  Tom soon started to have some good results on this bike and was occasionally included in the works team.

Unfortunately, Tom’s brother Jack passed away at a trial and Tom decided to organise a trial in his name, The Jack Leslie Ellis Memorial Trial, which continues today.

Tom continued to ride and had success in the 1947 Scottish Six Day (SSDT) with a 10th place and an 8th place in 1948.  He was also 2nd in the British Experts Trial which was no mean achievement.  A Royal Enfield was obtained for a ride in the 1950 Welsh ISDT but mechanical failure caused a retirement and a subsequent works BSA ride was negotiate

Tom became a valued rider in the team and competed at the highest level, ISDT medals representing Great Britain and gaining many awards in trials at home and abroad.  The Scott Trial was a regular and favourite ride and he collected 12 Silver Spoons in 14 rides.  Joint 7th was his highest total, which again is no mean feat for any trials rider!  Tom also enjoyed the SSDT and was seen in the company of Arthur Lampkin at the Pre-65, apparently the journey to Fort William in Arthur’s Porsche was something of an adrenaline rush for him!

In 1956 Tom retired to Ripon where he opened a motorcycle shop and became active in the Club.  He also became interested in the sport of car trials and tests, driving with great verve and commitment, as he always did.  He observed in many trials but will be remembered by the riders at his favourite section, on the Fleetham’s farm down by the bridge.  Sadly he will not have seen it in its new rebuilt form, but it will still be “Tom’s Bridge”.

We run various trials throughout the year.  We have 3 centre trials which are:

Resources for Riders
i

All your Results from Club Trials

Observers are always needed at our events. - Without them you wouldn't have a trial! If you can persuade anyone to come with you to events and observe we would be very grateful and would be happy to give them instructions on 'observing'.

We use cookies on our website to give you the most relevant experience by remembering your preferences and repeat visits. By clicking “Accept”, you consent to the use of ALL the cookies.
Cookie settingsACCEPT
Manage consent

This website uses cookies to improve your experience while you navigate through the website. Out of these, the cookies that are categorized as necessary are stored on your browser as they are essential for the working of basic functionalities of the website. We also use third-party cookies that help us analyze and understand how you use this website. These cookies will be stored in your browser only with your consent. You also have the option to opt-out of these cookies. But opting out of some of these cookies may affect your browsing experience.
Necessary Always Enabled

Performance cookies are used to understand and analyze the key performance indexes of the website which helps in delivering a better user experience for the visitors.

Analytical cookies are used to understand how visitors interact with the website. These cookies help provide information on metrics the number of visitors, bounce rate, traffic source, etc.

Advertisement cookies are used to provide visitors with relevant ads and marketing campaigns. These cookies track visitors across websites and collect information to provide customized ads.

Other uncategorized cookies are those that are being analyzed and have not been classified into a category as yet.